There’s been something brewing in bitcoinland, during a time when not much seems to be happening on the surface. In the recent era of sideways trading action, reminiscent of the summer of 2018, it may seem at times that bitcoin is suffering.

Movement (or lack thereof) lately is uncharacteristic to the wild volatility often seen across crypto markets in the past. Few experts would project that the current BTC price is a reflection of market stabalisation, so what is going on below the surface of this supposed “crypto winter”?

An event has been running in the background that seems to have gone unnoticed by the mainstream noise. While the nay-sayers and crypto-doomsday orators are warning of blood in the bitcoin streets, a less subjective soapbox preacher has been quietly giving their sermon. The gospel being communicated is one based in fact, not opinion, and has caught the attention of many HODLers, some of whom are seeking reaffirmation that the bitcoin standard is here to stay and the moon is still within reach, if not more than ever before. 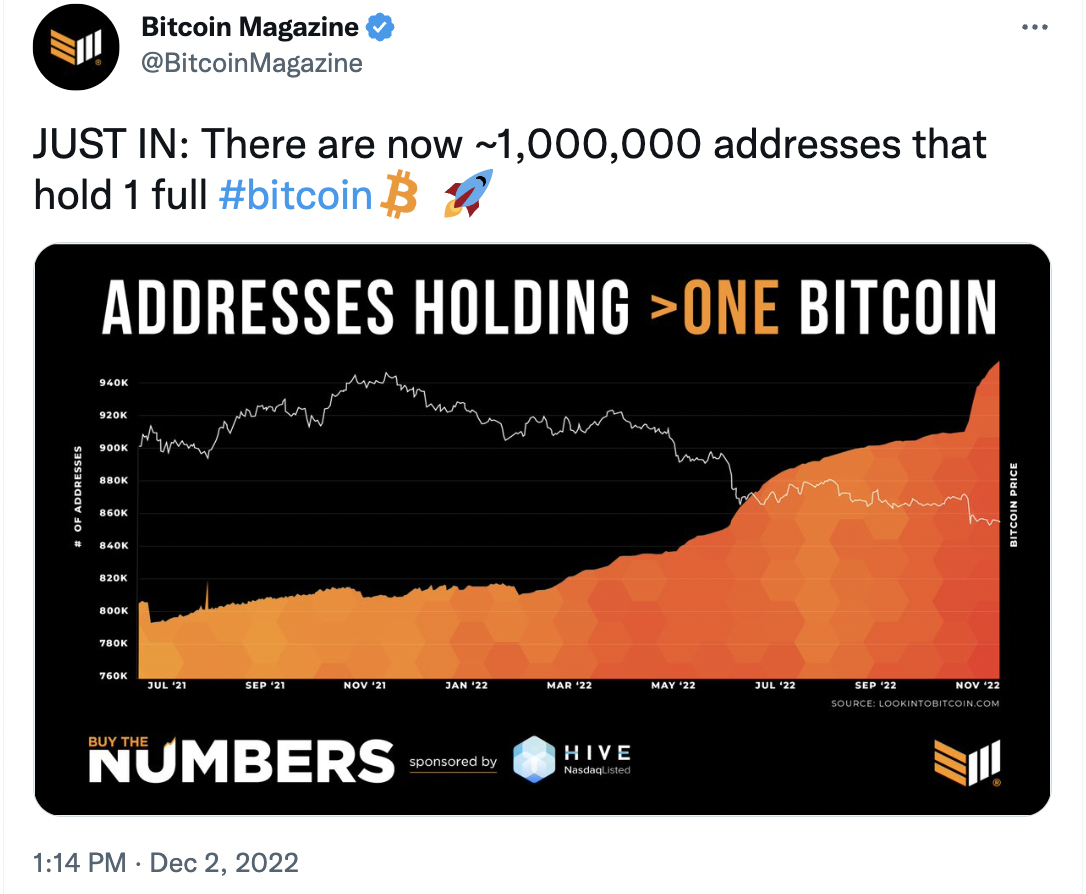 Contrary to the slide of 2022, which has witnessed the expected pullback from the BTC all time high set in November of 2021 (Bitcoin’s best year on record), wallet addresses viewed on the bitcoin blockchain are steadily collecting BTC in the face of negative media attention including the most recent FTX bombshell.

The amount of bitcoin wallet addresses HODLing 1 bitcoin or greater has now hit its own all time high and is currently edging on ~1 million at the time of writing. This indicates that orange-pilled believers are using the current downtrend as an opportunity to stack sats at a cheap price comparatively to what they project the future holds for bitcoin’s price potential.

This naturally occurring market behaviour aligns with the outflow of coins off exchanges in record amounts to the tune of billions. With the notion of self-custody becoming more attractive and popular with each fallen entity or third party broken trust story in the news, these wallet addresses are proof (for now at least) that true wealth accumulation is only possible when one truly owns their coins by obtaining 100% control of their asset(s).

As the ongoing new history of custodial crypto collapses unfolds, people are understanding the value of complete control over one’s coins. This is very likely to be the reason we’re seeing such a record exodus toward self custody.

Are you one of the many bold believers snatching up satoshis at today’s alluring live rate so you can join the >1BTC cohort of wallet addresses?

You could be literally one in a million worldwide who owns 1BTC within their self-custody wallet. To add money to your MyBTC.ca account balance, click here to stack some more sats today!